This is my booktube about the book I had to read called «Bridget Jones, The Edge Of Reason» by Helen Fielding. In the following booktube I develop the description of the main characters;

Description of a Touristic Place

This is our work: 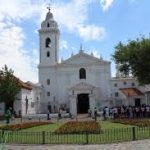 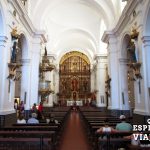 One of the most important and well-known churches in Argentina, is the “Iglesia del Pilar”, which is situated in Buenos Aires, Recoleta. This glamorous church has a beautiful infrastructure and surroundings which attracts many tourists from other nations. It’s very frecuente that not only tourists but also local people visit this marvelous church.

The enchanting church is surrounded by a huge park known as “Plaza Francia” which is very well known in Buenos Aires as it also surrounds the Recoleta Cemetery . This park is full of exotic flowers and tall trees. At the entrance of the church there is a huge black gate which leads to the huge white building where people can assist to mass and pray. Furthermore, if we look to the left we see find the immense bell tower which can easily be seen in the distance.

Moreover, on the inside the church has a very cozy atmosphere. We can find a lot brown wooden benches, and huge white columns all along the aisle. Beside, in the center, we can see charming golden decorations of which the figure of jesus stands out. It’s comfortable atmosphere is what attracts people and makes them want to visit the church frequently.

In conclusion the “Iglesia del Pilar” is one of the most visited churches in Buenos Aires not only because of its incredible infrastructure but also for its  beautiful surroundings. We can firmly assure that t if you travel to Buenos Aires, you cannot miss the opportunity of visiting this church.

White as the snow, bright as the sun

so special, so calm

that when you enter you feel warm

At the moment you enter

A place to show yourself,

to show your problems

In our language and  literature classes we have been writing our own poems. I worked with Ramiro Aizpiri and we did a poem about the Iglesia del Pilar. Once we had finished the poem we did a video including pictures as well as the finished poem.

This is our video:

Today, 3/4, we did an online test with our Language teacher Pilar Pando. After anserqing all the questions we had to post the test in our blogs.

1)Write a paragraph (80-90 words) saying what has happened to the male character. Use a variety of tenses: simple past, past continuous, past perfect and conditional type

The male character of the video was walking alone in the middle of the night when suddenly he was surprised by a man who shoot him and then ran away. While he was shouting for help a lot of cars passed through the road but no one realized he was there. He started thinking that this wouldn’t have happened if he hadn’t run away from his mother’s house. The saw a lot of blood coming through his arm so he went unconscious. A woman who passed through saw him and helped him. While she was driving him to the hospital she tried to wake him up. When they arrived to the hospital the doctor said that if she had found him a little later he would be dead by now.

Simple Past: Something about inside told me to turn around

Past Continuous: I was working late and it was a cold night

Past Perfect: I had left my phone at the office

Conditional type 3: If I had found you ten minutes later, it would have been to late

Write a paragraph (summary) of 80- 90 words of the story The Escape. Answer the questions in a paragraph. Include a variety of tenses: simple past- past perfect- past continuous and present perfect.

The story, The Gold Cadillac, is about an African American family during the period of time were black people were less than white people and were not accepted in society. This story is told from the 1st person point of view which is the younger daughter of the family called Lois who is 10 years old, that’s why the story is perceived with a very innocent tone. The family was formed by Dee which was the mother, the father and their two daughters Lois and Wilma. The father of the family had just bought a new car but not any car, a charming gold Cadillac to drive down south with. In spite of the excitement and joy of all the family, Dee, the mother, is not happy at all about this and refuses to ride in the car. Her anger was caused because her husband had bought a new brand car with the money they had been saving for years to buy a new house. She finally gives in and the whole family heads down south in the gold Cadillac to visit their relatives who lived there. On the way down, people gave them dirty looks because African Americans were not supposed to have such an expensive car.  A policeman pulls them over and accuses the father of having stole the car. At the end of the story, the father ends up selling the car and decides to get a cheaper car so people will not harass them any more and also to start saving money for their new house.

10. Is it consistent in its use of this point of view? If shifts are made, are they justified?

11.What are the advantages of the chosen point of view?

This is my tutorial of reported speech:

Last class, our language teacher,  told us to make groups of 2/3 and do a pesentation about a process of how something is made/produced. In this presentation we had to include at least 5 passive terms. I worked with Valentina Re and Juana Zufriategui and we made a pesentation of how lollipops are made.

This is the tutorial that I have choosen:

Last class, in our language class we did some activities on passive Voice.

This are my answers: 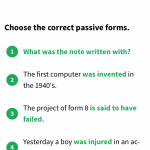 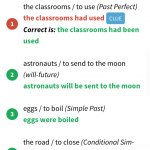 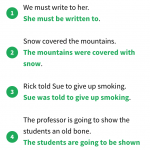 With our Language teacher, Pilar Pando, we read a story call «Robert and the dog». After reading , we had to make a presentation of the anallysis of the story. I worked with Valentina Re and Anouk Laferrere.

Robert and the Dog

In our Language class, with Pilar Pando, we read a story called «An Astrologer’s Day». After reading and analyzing all together in class, we have to make a dialogue in pairs, between the astrologer and his wife. I worked with Trini Porretti and this is our dialogue: