Today, first day of classes of October, in Language, we worked in pairs, writing a dialogue based on the famous story written by Edgar Allan Poe, “The Tell Tale Heart”. In order to write the comunication between the policemen and the man, we used Pixton, an application for creating comics. Well, you’ll see the rest. This is the comic that I created with Anouk de Laferrere:

This is my news report of Mexico’s Earthquake. I’ve worked with Trinidad Porretti

A powerful 7.1 magnitude earthquake struck southern Mexico on Tuesday at 2:15 pm. The epicentre of the earthquake was in Puebla State, but then it spread to other cities, leaving approximately 277 casualties.

Mexico and Morales were the cities which were hit the hardest by the earthquake besides Puebla State. It is believed that this earthquake is an aftershock of the one that took place a week ago, the 8th of September, in the same place, as it is an usual thing to happen. There have been 86 deaths in Mexico city, 71 in Morelos and 46 in Puebla State. It is an extremely rare coincidence that these earthquake took place on the anniversary of the one that devastated Mexico 32 years ago. Dozens of buildings have collapsed, including more than 40 in Mexico City alone. 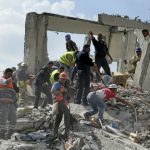 Citizens and rescuers have been working tirelessly through the night in order to dig people out of the rubble. Not only have the citizens provided help, but also various foreign countries have donated and helped the cause. Electricity has been cut off for many city dwellers and the government is reportedly trying to fix this issue. Among the buildings that have collapsed is an elementary school, which collapsed killing at least 21 children and several adults. Furthermore, 15 people were killed when church in the slopes of a volcano, which appeared to have a small eruption following the earthquake, collapsed during the a mass.

This calamitous event ended the lives of many and destroyed hundreds of buildings, leaving many inhabitants homeless. The Mexican President Enrique Peña Nieto has called out to the population to remain calm while the agents assess the damage. World leaders have expressed their sympathy and offered support for Mexico, which will need the help to recover from the fatale earthquake.

This is my booktube about the book I had to read for this second term call «The Secret Garden» by Frances Hodgson Burnett. I choose the tiopic which was to describe the characters of the story.

Last class our speaking skills teacher, Pilar Pando, asked us to prepare our orals in a differnet way. The task consisted on preparing a summary of a short story we had already read all together in class called «Robert and the Dog» and record it. I recorded with a tool called «VoiceThread»

This is my recording:

Last class, Pilar Pando, asked us to look for a tutorial about passive voice.

This is the tutorial that I found:

Last class our speaking skills teacher, Pilar Pando, asked us to prepare an oral about a crime report, conected the topic we are studing now which is Crime. She told us to look for a report in UK or USA newspapers. I took my report from a British Newspaper call «The Guardian».

Here is the link of the article that I choose, my oral about it and also the words I am going to teach to the class:

This is my oral presentation about a crime report I found on a british newspaper call The Guardian. This crime report was published on the 16th of May of 2017. The tittle of it is “Traffickers and smugglers exploit record rise in unaccompanied child refugees”. This report talks about many child refugees which are minors that are crossing the borders alone since 2010, and how they suffer from slavery and prostitution.

The number of refugees and migrant children travelling alone had increased a lot. This children are exposed to have sexual abuses and exploitations by hands of traffickers and opportunists. Last wednesday the UNICEF published a record which established that the number of children that travel unaccompanied had increased a 500%. The central mediterranean passage is one of the most dangerous migration route for children. Many of them had been trapped and forced to work. The UNICEF establishes that there are many children that travel alone and that adults are failing because they do nothing to help this children and avoid this from happening.

Traffickers and smugglers are exploiting them for their personal gain helping them to cross borders only to sell them for slavery or forced prostitution. One 17-year-old girl from Nigeria told UNICEF that she was trapped in Libya for three months and sexually assaulted by a smuggler and trafficker as she attempted to travel alone to Italy. The girl was interviewed and this is what she said of the man who offered to help her, “ “Everything he said,  that we would be treated well and that we would be safe,  it was all wrong. It was a lie. He said to me if I didn’t sleep with him, he would not bring me to Europe. He raped me.”

Furthermore, it is another case in which to twin brothers reported having to work on a farm on Libya in order to pay the smugglers, a situation of slavery. This twins told to the UNICEF that if you tried to escape they shoot you, and if you didn’t work they beat you with a cane.

To conclude, I think that there are beign many cases like this, and this has to stop. The people that are doing that to the children have to be judge by the law and people have to do something for this to be avoid.

In our speaking skills class our teacher, Pilar Pando, gave us a book to read every term. When we finish reading the book we have to choose a topic from her blog and make a booktube. I have to read a book called «Number the Stars» by Lois Lowry. I choose the topic that is to develop the characters and the relationships between one another. Here is my booktube:

Last month ,Pilar, gave us a book from the lending libary to present on 17/11. We had to choose a task to prepare the video, I choose the task which says  “Choose a section of the story and rewrite it (from the point of view of another character/ as a diary entry/ as a monologue/ as another chapter/ etc)”. The book I had to read was Charlotte’s Web and I decided to make a diary of 1 chapter of the book from the view point of Wilbur, the pig.

This is my Booktube:

Last class, with our Writing Skills teacher Pilar Pando, we corrected all together the  unit 6. In this unit there were exercises that help and guide us to know how to write a good story.

Here is I chart that will help us to write our first: With Pilar Pando, we have to read our book of the Lending Libary and create a booktube. She gave us many tasks to choose. The task that i choose is to «Describe some characters of the story, and describe their relationship».

This is my booktube: